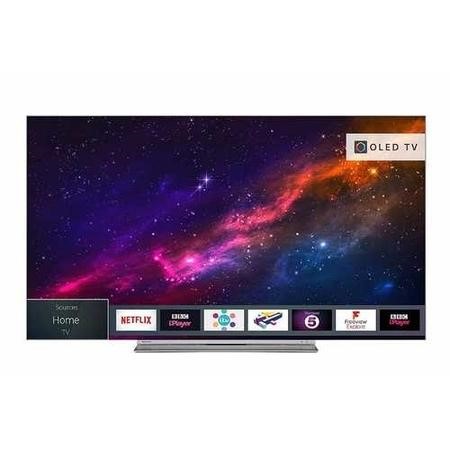 OLED technology for the most life-like images

OLED TV (Organic Light-Emitting Diode) offers perhaps the most advanced picture quality currently available. Unlike LED screens, OLED doesn't require backlighting, so the colour is consistent right across the screen, with greatly enhanced contrast levels. For the deepest blacks, OLED is without rival.

Get the most from your viewing, with HDR

This Toshiba 65” TV is compatible with HDR10 and HLG for the best colour realism possible. As well as extending the range of colours, HDR also delivers brighter whites and darker blacks, helping to give this TV stunning levels of contrast. HDR10 and HLG formats are both covered. HDR10 is widely used on UHD gaming consoles from Sony and Microsoft. HLG (Hybrid Log Gamma HDR) is a broadcast and user generated standard format that is set to become the standard for transmitting 4K signals.

Dolby Vision optimises the HDR format to give quite simply the sharpest, most accurate images possible. Dolby Vision-equipped TVs decode both generic HDR content and content that's specifically been encoded in Dolby Vision - a leading format in Hollywood and cinemas. Dolby Vision also adjusts the picture to take full advantage of each display's characteristics and presents an optimized picture for each scene in specially mastered content.

As well as an impressive picture quality, Toshiba has worked hard on the sound, too. Featuring a speaker system by Hi-Fi experts, Onkyo, the 65X9863DB sounds richer and more dynamic than other flatscreen TVs. Built-in XSound Pro produces an expansive sound, giving everyone in the room the best seat in the house.

Take control to the next level with voice command via Alexa. Pair up the TV with your Amazon Echo device and you’ve got access to one of the most advanced voice recognition systems on the market. Now you can simply ask Alexa to change the channel or turn down the volume.

Featuring an improved interface, Toshiba’s Smart TV portal is now better than ever. The Toshiba Smart Centre platform gives access to a great range of Smart TV services, including the BBC iPlayer and Netflix 4K. There are also gaming apps and direct access to social media apps such as Facebook and Twitter. With a full web browser, you also get access to browse the web, just as you'd do on a PC, laptop, tablet or smartphone.

Watch what’s on your smartphone on the big screen, with Wireless display

The 65X9863DB offers Wireless Display via Miracast. Miracast lets you watch what's on your mobile or tablet, on the big screen - wirelessly (requires a Wi-Fi network and Miracast certified smartphone -firmware update may be required).

The Toshiba 65X9863DB also features Freeview Play. This combines catch-up TV, on-demand services and live television to make it easy to watch what you want, when you want. It's free from subscription and compatible with existing broadband services, while BBC iPlayer, ITV Player, All 4 and Demand 5 are available without having to open specific apps, giving effortless scroll-back TV (requires broadband Internet connection with a minimum speed of 2Mbps).

With four HDMI sockets, this Toshiba 65 inch OLED TV is ideal for plugging in your set-top box, Blu-ray player, games console and other device. For older components, the 65X9863DB includes composite, component and SVGA inputs. A headphone socket for private listening is also standard. Throw in an optical connection for a soundbar/base and you've got everything you need in a top-rate TV.

With three USB sockets, you can effortlessly slot in your media devices. Featuring a handy two-way USB, the 65X9863DB is also ideal for connecting a suitable HDD (Hard Disk Drive) device and recording live TV.

Move up to the best in vision, sound and features, with the Toshiba 65X9863DB.