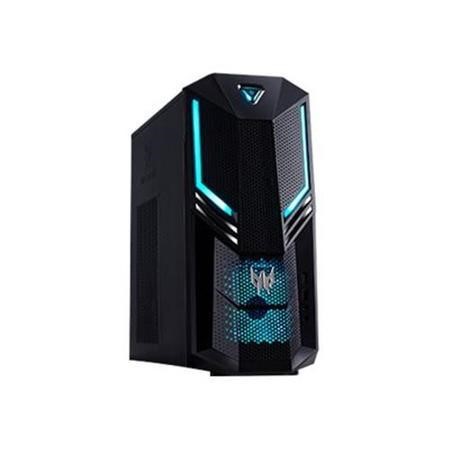 Take on your favourite games with the Acer Orion 3000 Intel Core i5+ GTX 1050 Ti Gaming PC. With an 8th generation i5+ processor, your PC is able to run the latest titles everyone's talking about, as well as the classic games that helped you hone your skills.

When you're not gaming, the i5+ is more than capable of running demanding software, too. You can edit photos in great detail, take on everyday tasks and stream movies and shows without slowing down your PC's performance.

A good graphics card can be the difference between victory and defeat in many games. The Acer Orion 3000 features an NVIDIA GTX 1050 Ti graphics card, so you can enjoy a Full HD resolution and smooth gameplay, whether you're leading your team in Overwatch or building your way to victory in Fortnite.

And with a great frame rate, you'll find it much easier to track your opponent's movements, giving you the upper hand in the match.

Go from switching on your PC to gearing up for battle in a matter of minutes with Intel Optane. The Acer Orion 3000 packs 16 GB of Optane memory, giving you SSD-like speeds that make your computing experience feel more slick and responsive. Booting up your PC or finding a specific file no longer requires a long wait.

With 1 TB of storage space, there's plenty of room to keep your library of games, music, movies and documents.

With its futuristic looks and bright front LEDs, your Acer Orion 3000 Intel Core i5+ GTX 1050 Ti Gaming PC's looks are just as striking as its performance. As well as its sharp design, the casing helps to maintain your PC's performance with front mesh that promotes airflow to the components, keeping your processor and graphics card cool during long gaming sessions.

The Acer Orion 3000 also features headset cradles on both sides of the case, giving you an efficient place to hang up your headphones after you've won.