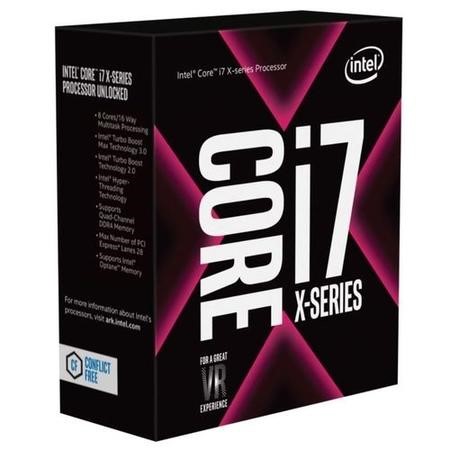 There are a wide range of Intel’s X-Series CPU’s, which allows users to find the CPU that fits their PC build best. The i7-7820X CPU supports 4 DDR4 memory channels and 28 PCI Express lanes such as the i7-7800X but is the first of the i7 family to feature Turbo Boost 3.0. Intel Smart Cache and other features are also bolstered to help get the most from your PC system.

Enter the realm of extreme performance where game play is so life-like it is difficult to tell where reality ends and the game begins. Surrounded by multiple high-res displays and premium audio sound, you are totally immersed in the action of your AAA game title or the latest virtual reality thriller. Play extreme, live extreme, game extreme on a computer with an unlocked Intel Core X-series processor.

And because modern gaming extends beyond just gameplay, you want to simultaneously share your gameplay with the community and the world. Record all the action capturing that once in a life-time manoeuvre that brought you to victory, and convert your game play into a shareable format to immediately post on your social media page. That is extreme mega tasking and the power of the Intel Core X-series processor.

Spend more time creating while your Intel Core X-series CPU powered system simultaneously handles uploading massive 4K files, rending effects and other compute intensive workloads in the background. And with the updated Intel Turbo Boost Max Technology 3.0, you have the control to give priority to the apps that need the power of the two best performing cores.