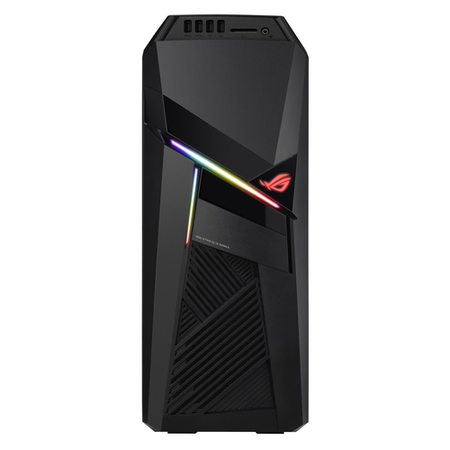 REBIRTH OF A GAMING BEAST

The newly re-engineered ROG Strix GL12CX further pushes the limits of extreme gaming performance and features a striking, unconventional design. This Windows 10 gaming desktop now boasts an 8th Generation Intel® Core™ i5-8400K processor and NVIDIA® GeForce® GTX 1060 graphics for unrivaled gaming experiences. It features the ROG-exclusive DIMM.2 module with support for dual SSDs that can be configured in RAID, along with tool-free expansion bays and an esports-ready hot-swap SSD tray for easy upgrades. A transparent side panel and Aura Sync lighting effects let you customise the colours of Strix GL12CX, inside and out.

ROG Strix GL12CX provides robust cooling for epic gaming marathons. Its intelligent cooling system features two dedicated isolated air chambers to improve heat dissipation. Strix GL12CX includes the innovative interwoven HyperStream design that allows for maximum heat removal and airflow into the chassis. In addition, the three fans on the top and bottom of the chassis ensure constant airflow through the system to keep the power supply and storage drives cool in the heat of battle.

Aura Sync: Your Machine, Your Colours

Customisable Aura Sync lighting has over 16 million colours and several preset effects so you can customise your own RGB configurations, or use them to react to in-game events and environments in compatible games. There’s even internal illumination on several components, all of which can be seen through the optional transparent side panel. You can even synchronise effects and colours with Aura Sync-compatible keyboards, mice, headsets, and other peripherals* to give your gaming setup a consistent look.

Only the very best processors are chosen to power ROG Strix GL12CX. It features a 8th Generation Intel Core i5-8400K CPU that’s factory overclocked for a serious performance boost. Strix GL12CX is great for gaming, but it’s capable of so much more: multitask, play, stream, and record your gaming sessions, with plenty more performance to spare!

The speed and intensity at the highest levels of esports tournaments keep competitors and fans at the edge of their seats. Esports tournaments such as Rift Rivals, IEM Australia, and ROG Masters require gamers to save their customised settings in a hot-swap SSD prior to going up on stage. ROG Strix GL12CX features a hot-swap 2.5-inch SSD tray — esports is definitely in its DNA!