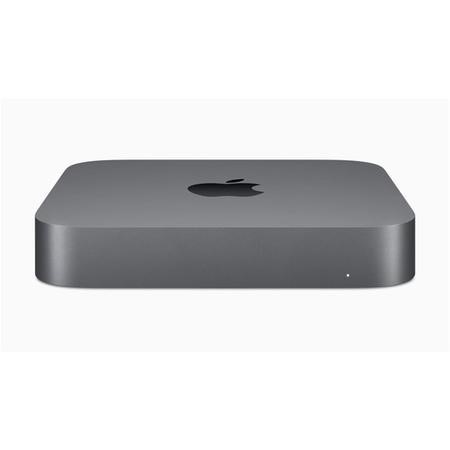 Five Times Faster and More Powerful Than Ever

Now with quad- and 6-core 8th-generation Intel Core processors with Turbo Boost Speeds up to 4.6GHz and Intel UHD graphics, Mac mini delivers up to five times faster performance than the previous generation.1 Mac mini now rips through traditional desktop tasks like photo and video editing, music creation and software development, and crushes pro workflows including video transcoding, code compiling and live musical performances. And with up to 64GB of 2666 MHz memory, Mac mini can load larger files into memory, run more virtual machines or manipulate even larger data sets. Every Mac mini now features the speed and reliability of all-flash storage. With capacities up to 2TB, the SSDs on Mac mini are up to four times faster, so working with large files and opening apps is quicker than ever.

With four Thunderbolt 3 ports, twice as many Thunderbolt ports as the previous generation and each with double the performance, the new Mac mini can connect to high speed storage, 4K and 5K Thunderbolt displays, and output video in three formats. Mac mini also features an HDMI 2.0 port, two USB-A ports, an audio jack and Gigabit Ethernet, so it can connect to almost anything. And for super fast networking performance, Mac mini offers a 10Gb Ethernet option for the first time.

Now in a gorgeous new space grey finish, every new Mac mini enclosure uses an Apple-designed aluminium alloy made from 100 percent recycled aluminium for the first time, which has the same strength, durability and beautiful finish as the aluminium in all Apple products.2 The Mac mini also features the use of more post-consumer recycled plastic in parts like the foot. All together these advancements help to reduce the carbon footprint of the new Mac mini by nearly 50 percent.