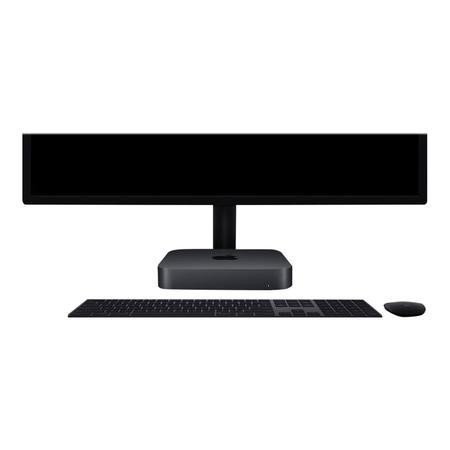 RE-ENGINEERED IN NO SMALL WAY

The Apple Mac Mini leads the way when it comes to being a compact desktop computer. Power everything from home automation to giant render farms with an eighth-generation Intel quad-core i3 processor and Intel UHD Graphics 630. The Mac Mini provides incredible computing power for industrial-grade tasks. So whether you're running a live concert sound engine or testing your latest iOS or iPadOS app, the Mac Mini is the shortest distance between a great idea and a great result. Utilise high-performance DDR4 memory, along with an ultra-fast 256GB SSD that will easily support all the demanding tasks you want to complete.

This Apple Mac Mini is powered by an impressive quad-core Intel i3 Processor, which offers fast, powerful performance that will fuel any creative flow or workflow. Whatever the task may be, the Mac Mini will easily be able to handle it without any compromises on performance or speed.

EXCEPTIONAL COOLING IN A TINY ENCLOSURE

Packing all this power into the same enclosure requires an all-new thermal architecture. This includes all-flash storage, a bigger fan, expanded vents and a redesigned power supply. All this provides a boost to high-end performance that you need to complete work and intensive tasks.

The Mac Mini offers integrated high-performance 2666Mhz DDR4 SO-DIMM memory which provides faster rendering, and can work with massive files or running multiple virtual machines. You can also configure your Mac Mini to hold even more memory up to 64GB, to easily run even heavier workloads.

Now including all-flash PCIe-based storage, with up to four times the read speeds of previous flash options, you can load giant files and launch apps faster than ever. With a 256GB SSD, you have plenty of space for all of them.

The Mac Mini houses Apple's special T2 Security Chip, a second-generation custom Mac silicon designed by Apple to make your computer even more secure. The T2 Security Chip consolidates several controllers into one, and includes a Secure Enclave coprocessor that provides the foundation for encrypted storage and secure boot capabilities.

With a wealth of ports, the Mac Mini is more than ready for a variety of workflow configurations. Thunderbolt 3 is the most powerful and versatile port ever, and the Mac Mini has four of them. The HDMI 2.0 port delivers more bandwidth than its predecessor, so you can experience faster frame rates. Mac Mini can also be configured with 10Gb Ethernet so it's ready to move large files and extensive amounts of data up to ten times faster.

Thunderbolt 3 gives you some seriously productive possibilities. Transfer data easily at up to 40Gb/s, and charge and power external devices. Connect up to two 4K displays, and even a third with HDMI 2.0, or even one 5K display. Pair Mac Mini with an eGPU for desktop-standard graphics performance.

Because of its size, performance and wide array of ports, the Mac Mini goes where no Mac has gone before. Now with even more cores packed into its 19.7-cm square frame, you never know where you'll find a Mac Mini, or dozens of them hard at work.