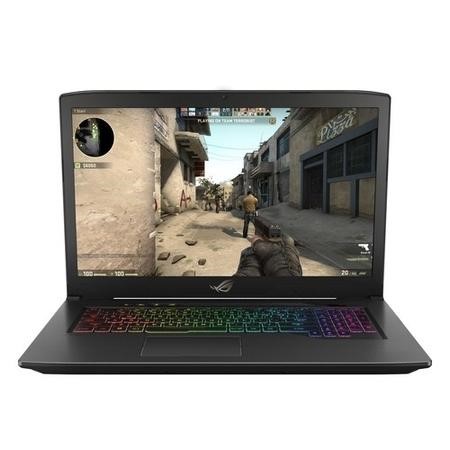 ROG Strix GL703GS SCAR Edition is built exclusively for the sharpest shooters in the meanest gunfights. This gaming laptop is designed to give you a competitive edge in FPS eSports titles like Counter-Strike, Overwatch, and Team Fortress 2.

Feel the power of Windows 10, the latest 8th Generation Intel Core i7 processors, and NVIDIA GeForce GTX 10-Series graphics; and enjoy the smoothest and most accurate visuals ever on an IPS-level display with a 144Hz refresh rate, 3ms response time, and NVIDIA G-SYNC technology.

With a desktop-style Aura Sync-enabled keyboard, N-key rollover, and fast-actuating keys, Strix GL703GS SCAR Edition keeps you centered on the maps — so you'll rank high, and take out targets with absolute precision!

Taking both its name and design inspiration from the FN SCAR assault rifle, Strix GL703GS SCAR Edition is designed for top marksmen. Like its namesake, Strix GL703GS SCAR Edition pairs agility with performance, packing all its lethal firepower into a compact chassis with a thin 2.4cm profile, and an overall weight of just 2.6kg! Moreover, it looks the part, too — its Gunmetal Grey finish mirrors that of the deadly weapon.

Strix GL703GS SCAR Edition has an anodized Gunmetal Grey finish designed to mimic the cold, dark feel of an assault rifle. It's a true reflection of a warfighter's inner calm, focus, and precision. With such precise weaponry, it's up to you to take a slow deep breath, and squeeze the trigger.

Asymmetrical Design That Goes Against The Grain

The ROG spirit of defying convention is evident in the asymmetrical design of Strix GL703GS SCAR Edition. The distinct slashes across the laptop lid and the keyboard palm rest area are inspired by a bullet homing in on its target.

Kevlar is tougher than steel and is resistant to extreme temperatures. It's a material that epitomizes survival and pushing past limits. Strix GL703GS SCAR Edition features a printed woven Kevlar design around its keyboard that changes when you view it from different angles. Its Gunmetal Grey lid represents a weapon of absolute precision; the Kevlar-like weave symbolizes unrivalled toughness.

Even the edges of the touchpad feature crosshair markings to reflect the precise nature of Strix GL703GS SCAR Edition.

Intel Speed Shift and Turbo Boost technologies enable the processor to hit speeds of up to 4GHz (four-core) and 3.9GHz (six-core) respectively. Intel Hyper-Threading enables up to 12 threads to handle every task quickly and efficiently, including gaming, recording, and live-streaming all at once.

GeForce GTX 10-Series also supports Microsoft DirectX 12, enabling the newest visual effects and rendering techniques for gaming experiences that are more realistic than ever before.