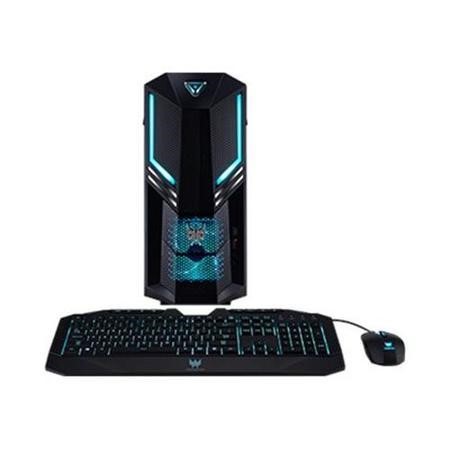 The Acer Predator Orion 3000 Intel Core i5 GTX 1060 Gaming PC is part of our Gaming range, which features the most powerful PCs available today. It has superior graphics and processing performance to suit the most demanding gamer.

The Predator Orion 3000 is run by an 8th gen Intel Core i5 processor. It's powerful, so you play games and run demanding photo and video editing software with ease. Multitasking also comes naturally. You can have multiple apps open at the same time without any noticeable drop in performance.

There's plenty of room to store games and media thanks to a 1 TB hard drive and 128 GB SSD storage. That's enough space for your favourite games, photos, songs and movies. The speedy SSD drive helps to speed up performance, which means faster loading times.

Intel Optane speeds up your gaming PC even more. It remembers the files and applications you use most often on your PC and loads them quickly the next time you go to use them. That means less waiting around for things to open.

Enjoy great-looking games thanks to a NVIDIA GTX 1060 graphics card. It operates at speed to reduce screen tear and blur, for sharper images and smoother gameplay. You'll notice it most when playing games with hyper-realistic graphics and open world games. It even lets you play virtual reality games that deliver a whole new level of immersion as if you're literally in the game world itself. All you need is a VR headset (sold separately) to enjoy games in a way you've never experienced before.

The Acer Predator Orion 3000 is designed to look and stay cool. The front facing LED fan spreads heat more evenly, so your PC is less likely to overheat during an intense gaming session. The payoff is performance you can always rely on.