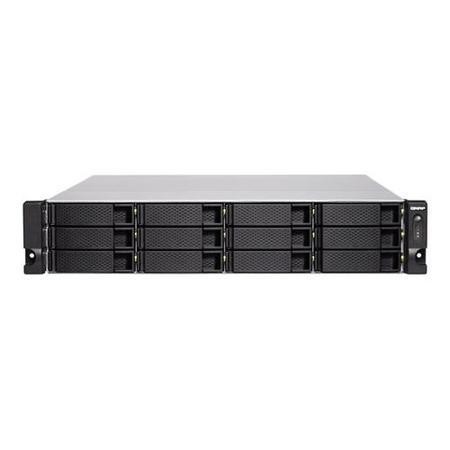 The Intel® Xeon® E based TS-1283XU-RP uses ECC memory that can detect and correct single-bit memory errors as they occur to prevent downtime and data loss, which is essential for always-on, mission-critical, server-grade applications. The TS-1283XU-RP supports dual-channel DDR4 memory in four Long-DIMM slots. When using paired memory modules, the TS-1283XU-RP can leverage the power of dual-channel architecture to boost performance. You also customize the memory

configuration (supports up to 64 GB RAM) of the TS-1283XU-RP for greater performance to tackle dynamically-changing workloads such as virtualization.

The TS-1283XU-RP provides two 10GbE SFP+ ports that use the Mellanox® ConnectX®-4 Lx SmartNIC controller. They support the iSCSI Extensions for RDMA (iSER) protocol, allowing data to bypass general network drivers, the socket layer, and to directly enter memory buffers of the ESXi server and storage to offload CPU workloads. When both the VMware® server and the TS-1283XU-RP support iSER, it can provide up to 60% increased random read/write performance and 50% decreased latency, providing an essential tool to optimize demanding virtualization applications.

The TS-1283XU-RP provides multiple PCIe slots. To ensure that the SATA drives have sufficient bandwidth, it is recommended to only use low-end expansion cards, (such as a 1GbE NIC, USB 3.0 card, or Wi-Fi adapter) with the PCIe Gen2 slot (Slot 1) as this slot is connected to the PCH. For high-end expansion cards (including 10GbE/40GbE NICs, SAS cards, Mustang-200 acceleration card, and graphics cards), it is recommended to use PCIe Gen3 slots (Slot 2, 3, 4) as these slots are connected to the CPU.

The TS-1283XU-RP features 4 PCIe slots that allow for the usage of various expansion cards to expand application potential.

4. Always consult the Compatibility List for supported NAS and graphics cards before purchasing a graphics card for the NAS.

By enabling Qtier™ auto-tiering on the TS-1283XU-RP, organizations can just buy the amount of SSDs needed, and attain the highest value/performance and optimal storage efficiency for data storage and sharing.

Maximize the value of SSDs with Qtier Technology

The TS-1283XU-RP supports software-defined SSD extra over-provisioning (OP) that allows you to allocate additional OP space (from 1% to 60%) to optimize random write speeds and to extend SSD lifespan. Now you can use affordable consumer SSDs for the TS-1283XU-RP, adjust the SSD OP, and potentially attain performance and endurance levels similar to enterprise-grade SSDs to enjoy faster file backups, smoother multimedia experiences, and optimized virtualization applications.

The TS-1283XU-RP supports QVR Pro surveillance solution with 8 license-free channels for surveillance monitoring, which can be expanded up to 128 channels* with additional channel license purchase for a more extensive security deployment. QVR Pro supports over 5,000 IP cameras, including all of the standard fisheye cameras available on the market. There are more advanced features for fully unleashing the potential of fisheye cameras: allowing a single fisheye camera's image to be simultaneously viewed in nine channels from different angles, and cross-platform hardware-accelerated decoding for fisheye camera images. QVR Pro ensures higher surveillance performance for greater security while providing deployment flexibility and budget-savings.

The Network & Virtual Switch application allows you to leverage limited physical network resources for unlimited virtual applications and centrally manage the entire network structure with a brilliantly-visualized network topology map. Flexible manageability enables you to reorganize physical and virtual network connections with greater ease, so you can allocate adequate network resources to the TS-1283XU-RP, virtual machines and containers whenever needed. The network deployment is greatly simplified while your network management efficiency is greatly improved.

organizations in routine backup jobs with cost-efficiency and high productivity.

Snapshots are essential for NAS data protection, and their block-level feature makes them a dependable method for protecting data in the face of the growing threat of ransomware. The TS-1283XU-RP supports up to 256 snapshots per volume/LUN, and up to 1,024 snapshots per NAS.

With high performance, potentially huge storage capacities, integrated virtualization solutions, and support for snapshots that record the state of the system at any time, the TS-1283XU-RP is perfect for backing up virtual machines.

Use the license-free QNAP NetBak Replicator utility to back up/restore files from Windows® computers. Time Machine® is fully supported for backing up Mac® computers.

In open network environments, data on connected devices may be exposed in a potential hack. The TS-1283XU-RP provides numerous security options, such as encrypted access, IP blocking, 2-step verification, and more. Administrators can also control the access rights of each user to different folders, and use the following tools to enhance security management.