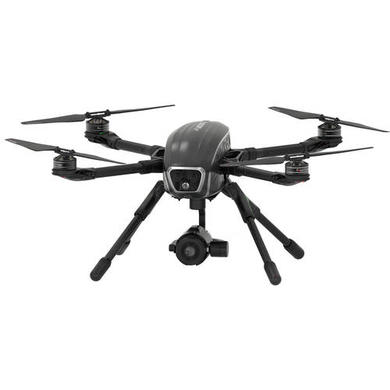 Designed for the high-end filmmaker in all of us, this impressive looking drone comes bolstered with some serious technology that lets you take effortless, professional-level footage every flight. What really sets this apart from other pro-drones is that it boasts not just one, but two cameras! The main camera is mounted underneath the drone on a moveable 3-axis gimbal that's capable of recording life-like 4K videos at up to 24 fps and capturing ultra-sharp images at 16MP. The second camera is nestled at the front, in between the forward obstacle sensors, which allows you to keep an eye on what's ahead of the drone. What's even more impressive though, is the fact you can view both cameras simultaneously on your smartphone in either split screen or picture-in-picture. Plus, the cameras can even be split between two remote controllers, which means one person can potentially pilot the drone while the other aims the camera below.

As for camera spec, how does a 4/3" CMOS sensor that shoots pics at 4,640 x 3,480 max resolution, along with a maximum shutter speed of 1/8,000 sound to you? It also boasts an ISO range of 100 - 6,400 for photos and 100 - 1,600 for video, so you can be sure of capturing great shots even in subpar lighting conditions. And, because the camera is compatible with Micro Four Thirds (MFT) system lenses, you'll be able to swap the lens with other MFT lenses to suit your shooting.

The drone itself features a retractable landing gear system that rises up when airborne to avoid blocking the camera's view, so you can enjoy a full, unrestricted 360° view of the world below. It also comes with an array of forward-facing obstacle avoidance sensors to give you that little boost of confidence when flying in tricky locations. Plus, with a top speed of 40mph and a flight time of over 29 minutes, you'll be able to fly further and longer to achieve that perfect shot!

What's in the box?