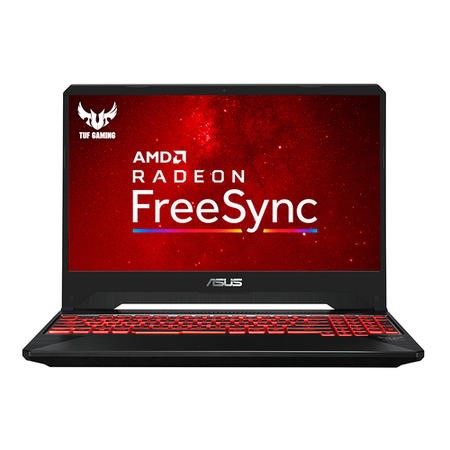 Experience smoother, more immersive gameplay with the new ASUS TUF Gaming FX505 AMD Edition. Featuring a cutting-edge IPS-level NanoEdge display with AMD FreeSync technology, and armed with the latest AMD Ryzen processor and discrete Radeon graphics, it delivers high-performance gaming at an affordable price. It's also tested and certified to military-grade MIL-STD-810G standards, so you're guaranteed toughness and durability that's second to none.

Engage the enemy with AMD firepower

Imagine a compact gaming laptop that punches well above its weight — that's what FX505 AMD Edition brings to the party. It's powered by the latest AMD Ryzen processor, which has quad cores and eight threads capable of speeds of up to 3.7GHz. And it's not just for gaming, FX505 AMD Edition allows for faster, more efficient multitasking, including daily productivity tasks, surfing the net, and watching movies and videos. Paired with Radeon RX 560X graphics, you can rest assured that FX505 AMD Edition is up to the task, inside and outside the gaming arena.

Infused with the spirit of The Ultimate Force (TUF), FX505 AMD Edition has passed a series of rigorous military-grade MIL-STD-810G durability tests*, successfully surviving varying conditions including solar radiation exposure, high altitude, and temperature extremes. It's certified to endure day-to-day use, from accidental knocks to sudden drops on a desk. Durable and stable, FX505 AMD Edition has been pushed to the limit to ensure only the very best for gamers.

* These tests are held in strict environmental conditions and under the supervision of quality test engineers. Product testing without proper controls or guidance may damage the product, and in some instances, create situations where there is significant risk of injury, disability, or death.

Extreme immersion on an ultrafast display

The new NanoEdge design has a slimmer-than-ever 6.5mm bezel* for extremely engaging visuals in a much more compact package. FX505 AMD Edition features an ultrafast IPS-level panel for supersmooth gameplay with minimal motion blur. Wide-view technology ensures consistent colours when you're viewing the screen from extreme angles. Bezel width is the measured distance between the screen and the laptop frame.

* Bezel width is the measured distance between the screen and the laptop frame.