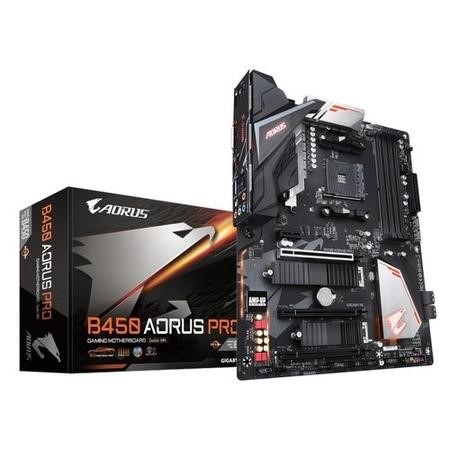 GAME WITHOUT COMPRISE WITH B450 AORUS PRO

Discover an extreme performance with four NVMe PCIe Gen3 and two high-quality SSDs. With Dual M.2s available on the AORUS 400-series motherboards, configuring RAID Arrays has never been simpler. With durability in mind, GIGABYTE provides a thermal solution for M.2 drives. The M.2 Thermal Guard prevents throttling and bottlenecks from M.2 devices as it helps to reduce and dissipate heat before it becomes an issue.

DELVE INTO A NEW UNIVERSE

Gaming PCs deliver the best VR experience, enjoy a virtual world with VR technology as this requires more performance than Full HD graphics for a steady 90FPS or greater.

Intel GbE LAN features cFosSpeed, a network traffic management application which helps to improve network latency and maintain low ping times to deliver better responsiveness in crowded LAN environments. Gigabyte motherboards also feature special anti-surge ICs that protect your motherboard, and your PC from any surge in power delivery that may occur, helping to ensure that your PC is equipped to deal with any potentially irregular and inconsistent power delivery.

CONNECTING THE FUTURE WITH USB TYPE-C

RGB Fusion allows more LED customisations than ever before, users can truly adjust their PC to embody their style. The redesigned RGB Fusion application enables you to completely control the LEDs, which surround the motherboard with even more styles and patterns with the smart mobile app, you can remotely access and control settings through your device. You can even set the LEDs to synchronize with your favourite music or have them change colours to indicate the CPU temperature. AORUS gaming motherboards supports either 5v or 12v digital LED lighting strips and up to 300 LED lights. RGB Fusion with Digital LEDs comes with nine new patterns and various speed settings with more to come.

GET THE GIGABYTE RGB FUSION APP

Not bright enough? You can install standard 12V external RGB, RGBW or RGB/UV light strips on the RGBW pin header and control its colour from the RGB Fusion software. Using a RGBW light strip with a dedicated white LED, users will experience brighter and more vibrant shades of colours.

RGB/UV light strips can illuminate your PC with a fluorescent glow. With UV reactive cables, paint or liquid your PC can radiate with a luminous glow.

RGBW light strips can produce a pure white colour instead of mixing R/G/B to produce an inaccurate white.

With dedicated white LEDs, light strips can produce a richer and brighter colour on the colour scale.

Uphold performance while staying cool with Smart Fan 5, users are assured that their PC will stay cool whilst gaming. Smart Fan 5 enables users to interchange their fan headers to imitate different thermal sensors at different locations on the motherboard. Not only that, with Smart Fan 5 more hybrid fan headers that support both PWM and Voltage mode fans have been introduced to make the motherboard more liquid cooling friendly. Achieve fan silence with Fan Stop, ensuring the most customisable fan control based on accurate temperature readings.

DURABLE AND BUILT TO LAST

Sulfur compounds in the air can penetrate tiny onboard resistors creating chemical change and causing these resistors to open or short. If either of these occurs the motherboard will fail to function. By equipping resistors with an Anti-Sulfur Design GIGABYTE gives ultra-durable motherboards a whole new meaning.

On-board LEDs controlled by the system BIOS specify if a malfunction is occurring, allowing users to promptly take action by quickly diagnosing which major component (CPU/DDR/VGA/HDD) is faulty.

With the G Connector, you can connect all the FP cables at once, streamlining the process of building your next PC and saving you some frustrations, as the tiny cables in the front panel connector can be hard to manipulate as space is restricted.

GIGABYTE DualBIOS™ means that your motherboard has both a 'Main BIOS' and a 'Backup BIOS', protecting users from BIOS failure due to virus, hardware malfunction, improper OC settings or power failure during the update process.

GIGABYTE has specially designed the BIOS to provide users the most premium experience while constructing their new system, with a new GUI and easier to use functionalities. The BIOS is crucial for users during initial setup to allow for the most optimal settings.

Each AORUS motherboard includes TriDef SmartCam software, remove backgrounds without the hassle of using a green screen. Through the SmartCam application you can now apply live filters, and fully control your background. Optimise and improve your connection with WTFast the Gamers Private Network (GPN). Cast your game anywhere and experience the greatest gaming moments with XSplit Gamecaster + Broadcaster. Host your game like a pro and with just one click stream your gameplay to Twitch, chat to fellow gamers and interact with social media integration.