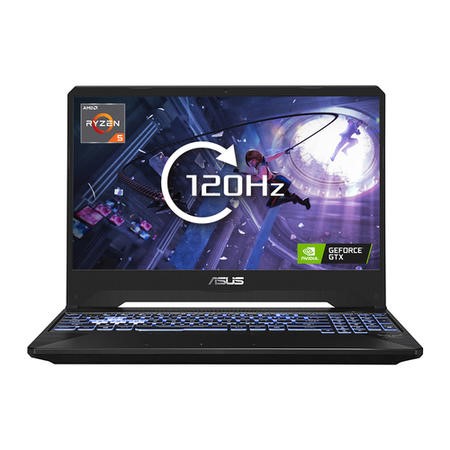 Buy a copy on Norton 360 Deluxe with your new laptop and be automatically entered in to the draw for the chance to win the money back for your laptop!

FX505 allows you to dominate in the heat of battle like never before. Powered by 16: The New supercharged, GeForce GTX 16 Series gaming laptops, this is the ideal battle box regardless of what games you play. Expect outstanding visuals in games like Fortnite, Overwatch and Rainbow Six Siege.

Imagine a compact gaming laptop that punches well above its weight — that's what FX505 brings to the party. It's powered by the latest AMD Ryzen processor, which has quad cores and eight threads capable of speeds of up to 3.7GHz. And it's not just for gaming, FX505 allows for faster, more efficient multitasking, including daily productivity tasks, surfing the net, and watching movies and videos. Paired with Nvidia GeForce GTX 1650 Graphics which boasts significant performance increases from previous generation GTX, you can rest assured that FX505 is up to the task, inside and outside the gaming arena.

The new NanoEdge design has a slimmer-than-ever 6.5mm (FX505) bezel* for extremely engaging visuals in a much more compact package. FX505 features an ultrafast IPS-level panel for supersmooth gameplay with minimal motion blur. Wide-view technology ensures consistent colors when you're viewing the screen from extreme angles

Infused with the spirit of The Ultimate Force (TUF), FX505 has passed a series of rigorous military-grade MIL-STD-810G durability tests*, successfully surviving varying conditions including solar radiation exposure, high altitude, and temperature extremes. It's certified to endure day-to-day use, from accidental knocks to sudden drops on a desk. Durable and stable, FX505 has been pushed to the limit to ensure only the very best for gamers.

FX505 has a keyboard that's optimized for gaming, featuring RGB backlighting* across all zones that can be controlled via the TUF Aura Core panel so you can express your own unique style. Exclusive HyperStrike technology ensures more accurate typing and improved ergonomics thanks to a desktop-inspired layout with a highlighted WASD key group, broader space bar, isolated arrow keys, and recognizable gaps between the function keys. In addition, Overstroke technology registers keystrokes faster for precise and effortless control.

FX505 has an extremely durable keyboard with keys that can endure up to 20-million key presses — twice the industry standard. It promises an extended lifespan without compromising accuracy and comfort.

The system automatically adjusts fan speeds according to CPU and GPU temperatures. Switch between Turbo, Balanced, and Silent modes to suit the situation at hand. Turbo mode is the most aggressive setting, providing the highest fan speeds and frequencies to fully exploit the power of FX505. Balanced mode optimizes performance and cooling to lower noise levels under 45dB for gaming, while Silent mode further curbs fan noise and is perfect for surfing the net, getting work done, or watching a movie. A default Windows profile with stock settings or a Manual mode let you quickly adjust fan speeds individually by a convenient keyboard shortcut

DTS Headphone: X™ technology delivers immersive, high-fidelity 7.1-channel virtual surround-sound for theater-quality audio, even when you're using a headset. It features optimized settings for games, sports, and movies, and has a built-in equalizer for additional fine-tuning.

FX505 features a host of I/O ports including a single USB 2.0 and two USB 3.1 Gen 1 Type-A ports for your gaming peripherals, as well as HDMI 2.0 to connect to an external display. All ports are situated on the left side of the laptop so there's nothing to interfere with right-handed mousing.

Unlimited access to over 100 high-quality PC games on Windows 10. One month subscription to Game Pass that’s included with the purchase of your device. Download and play new games on day one like Halo Infinite—plus recent blockbusters like Gears 5 and critically acclaimed indie games. With games added all the time, you’ll always have something new to play.