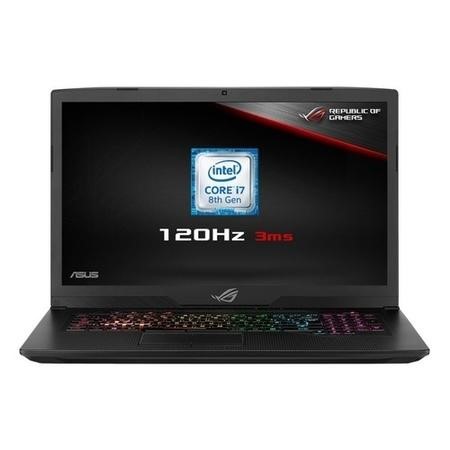 ROG STRIX GL703GM SCAR Edition: Absolute PrecisionROG Strix GL703GM SCAR Edition is built exclusively for the sharpest shooters in the meanest gunfights. This gaming laptop is designed to give you a competitive edge in FPS eSports titles like Counter-Strike®, Overwatch®, and Team Fortress® 2. Feel the power of Windows 10, the latest 8th Generation Intel® Core™ i7 processors, and NVIDIA® GeForce® GTX 10-Series graphics; and enjoy the smoothest and most accurate visuals ever on an Anti-Glare display with a 120Hz refresh rate, and blazing 3ms response time. With a desktop-style Aura Sync-enabled keyboard, N-key rollover, and fast-actuating keys, Strix GL703GM SCAR Edition keeps you centered on the maps — so you’ll rank high, and take out targets with absolute precision!

VR: Action-Packed Virtual RealityNVIDIA GeForce GTX 1060 VR-ready graphics put you in the midst of the action. Shooting games are hugely popular in the VR world so level up your marksmanship in a smooth, low-latency, and stutter-free setting.

ROG GL703 provides all the necessary tools to raise your mastery of the game to the next level. Engineered with the newest 8th Gen Intel® Core™ i7 Processor, NVIDIA® GeForce® GTX 1060 graphics, and Windows 10 Home, GL703 equips you to control the competition. So gear up, stake your ground, and get ready to win

The all-new GL703 is as sleek in appearance as it is strong in performance. Its understated, black brushed-metal cover conveys an inner focus and sophistication possessed by the most dedicated players — those who know how to keep their calm during even the most ferocious confrontations.

Unleash your gaming dominance with the revolutionary new GPU's that turn your mobile rig into a sleek, powerful gaming weapon. Gefore GTX series notebooks give you all the performance of a desktop in a mobile form factor, powered by game-changing Nvidia Pascal architecture. This means you can experience unbeatable energy efficiency, innovativenew gaming technologies, and breakthrough VR immersion wherever you game.

GL703 features a brilliant wide-view panel that's up to 50% brighter than competing models, and it offers a 100% sRGB colour range — so it's perfect for all game genres.GL703 also comes with ROG GameVisual, an easy-to-use tool that contains six presets that apply your preferences for a variety of game genres, enhancing sharpness and colour performance. You'll enjoy sharp, clear imagery with accurate, consistent colour from all viewing angles — for gaming experiences that bring you closer to reality!

GL703 treats your ears to audio that you won't forget! Built-in smart amplifier technology delivers louder in-game audio — up to 200% higher volume — and minimises distortion to ensure smooth operation. The system automatically monitors and reduces intensity of output to prevent potential damage from overheating or overloading.

LIGHT EM UP WITH AURA RGB

GL703 features built-in Aura RGB illumination technology, so you can fully customise the backlighting to match your gaming style or mood! The newly designed four hot keys are for in-game convenience and speedy control: With mute, volume up/down, and ROG Gaming Center buttons right where you need them, full control is at your fingertips. The keyboard features a highlighted WASD key group and anti-ghosting technology with n-key rollover to ensure that your inputs are tracked precisely, no matter how many keys are pressed; and the 0.25mm-deep keycap curve is precisely shaped for typing accuracy.

KEEP COOL AND CARRY ON

GL703 features an intelligent thermal design that employs multiple heat pipes and dual fans to maximise CPU and GPU performance. This allows you to run the CPU and GPU at full speed without thermal-throttling, and it means you'll enjoy total stability during the most intense battles!

GL703 offers full connectivity for all your gaming needs. We've put frequently-used input ports where you'll have fast access and the minimum interference — on the left-hand side. Also, four USB 3.1 Gen 1 ports is enough for VR setup, mouse, and controllers. Along with HDMI 2.0 and Mini DisplayPort 1.2 ports, connecting the latest, greatest gaming peripherals with GL703 is a cinch.

With a single press of a hot key, ROG Gaming Center enables you to see a comprehensive dashboard with loads of useful information, including CPU and GPU frequencies, voltages and temperatures. You can use the control panel to adjust CPU and GPU power consumption in real time! ROG GameFirst IV, ROG Aura Core, XSplit GameCaster, NVIDIA GeForce Experience, and ASUS Splendid software settings can easily be accessed through the Gaming Center. The Gaming Center is also available via the ROG Android app, so you can keep all controls close at hand, without disrupting gameplay.