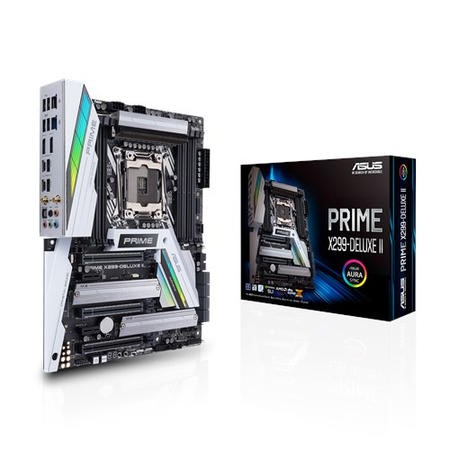 ASUS Prime X299-Deluxe II is the ATX motherboard that's been expertly engineered for professional content creators and power users who work hard by day and play harder by night. This powerful, innovative board puts a friendly face on advanced enthusiast controls, enabling you to maximize performance, cooling and personalization with ease. So, if you live to create, to explore, to enjoy and to push the boundaries, look no further than Prime X299-Deluxe II.

Cool to the core

Power delivery enhancements and dual ProCool connectors With up to 18 cores, four memory channels, and 44 PCIe lanes, the latest Intel® Core™ processors demand a lot more juice than typical desktop CPUs. Prime X299-Deluxe II feeds their appetite with 12 power stages hooked up to the socket and two more for the DRAM. It also augments the motherboard's link to the PSU with dual eight-pin connectors that pass 12V power directly to the processor. These connectors are based on our ProCool design, which uses solid pins that can handle more current than conventional connectors with hollow pins.

Higher power requirements are balanced by beefier heatsinks that carefully balance mass and surface area to maximize thermal dissipation. With a VRM-heatsink array and heatpipe positioned in the path of maximum airflow within the chassis, Prime X299-Deluxe II ensures optimal cooling and system stability for the latest Intel Core X-series processors.

Two M.2 slots sit under passive heatsinks to ward off the throttling that can occur with sustained transfers. A third pokes out from the PCB vertically near the memory slots, where connected drives benefit from ambient airflow around the CPU socket.

Prime X299-Deluxe II includes our new Fan Extension Card II, which adds six headers that are controllable via FanXpert 4. The card has three temperature-sensor headers to complement the one available onboard and, more importantly, it comes with three thermistors that you can affix to different components. In addition to supplying extra headers for cooling, it has three primed for RGB LED strips.