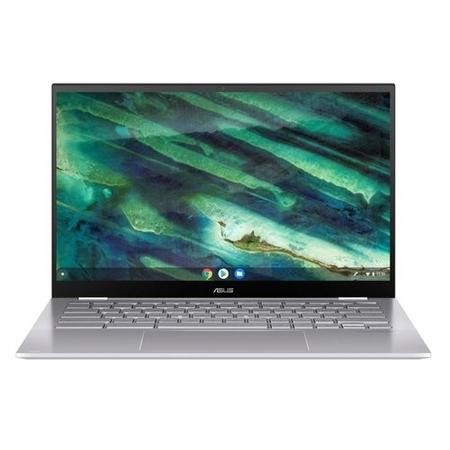 The iridescent Aerogel White is a fresh new take on the standard white hue. The color changes subtly as your viewpoint changes, ranging from traditional white to varying shades of blue, purple, red and pink.

Despite its compact dimensions, ASUS Chromebook Flip C436 has a full‑size backlit keyboard that boasts 1.2 mm of key travel to make typing more comfortable and accurate. A fingerprint sensor is incorporated into the keyboard, so there's no need to type in your password to unlock your Chromebook — a single touch is all it takes! In addition, its cleverly‑engineered touchpad incorporates palm‑rejection technology and multitouch gesture support for smooth, accurate control.

A touch of genius

ASUS Chromebook Flip C436 supports the latest Universal Stylus Initiative (USI) 1.0 standard to give you a natural-feeling active stylus experience so you can unleash your creativity: draft notes, sketch, or jot down your ideas whenever they strike you.

Two full-function reversible USB 3.2 Gen 1 Type-C™ (USB-C™) ports make it easy to charge your ASUS Chromebook Flip C436 or connect it to peripherals. Or if you're looking for more onscreen space, hook it up to an external display. For maximum convenience and compatibility, there's also a microSD slot to makes it easy to add extra storage.

Enjoy the best of Google

ASUS Chromebook Flip C436 is your gateway to the best of Google, whether for work or play. Get full access to the Google Play Store and your Google Assistant is always ready to help.