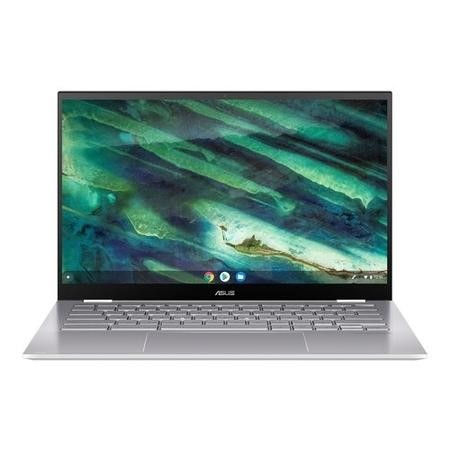 Free Next Day Delivery: Use code ASUSFND at checkout. *UK Mainland Only.

Free Windows 11 upgrade on this laptop and many more. For more information about Windows 11, the upgrade or the minimum system requirements, click here. Windows Update will indicate if and when your PC is eligible. You can check by going to Settings/Windows Update. Windows 11 isn't already preinstalled.

The 10th Gen Intel Core i7 processor makes ASUS Chromebook Flip C436 an ultra-powerful Chromebook. Combined with the full power of G Suite and other productivity apps from the Google Play store, ASUS Chromebook Flip C436 lets you breeze through whatever task awaits. This Project Athena laptop can even run for up to 12 hours on a single charge, so you can work or play throughout the day, even when you’re on the move.

Despite its compact dimensions, ASUS Chromebook Flip C436 has a full‑size backlit keyboard that boasts 1.2 mm of key travel to make typing more comfortable and accurate. A fingerprint sensor is incorporated into the power button, so there’s no need to type in your password to unlock your Chromebook — a single touch is all it takes! In addition, its cleverly‑engineered touchpad incorporates palm‑rejection technology and multitouch gesture support for smooth, accurate control.

Despite its thin and light design, ASUS Chromebook Flip C436 doesn’t compromise on sound quality. The innovative omnidirectional speakers project sound towards you for more immersive audio, whichever flip mode the laptop’s in. Four high-quality stereo speakers with extra-large resonant chambers generate high-fidelity audio and deliver surround-sound effects that are on a par with much larger laptops. ASUS Chromebook Flip C436 delivers crisp and powerful sound for both music and videos.

Two full-function reversible USB 3.2 Gen 1 Type-C™ (USB-C™) ports make it easy to charge your ASUS Chromebook Flip C436 or connect it to peripherals. Or if you’re looking for more onscreen space, hook it up to an external display. For maximum convenience and compatibility, there’s also a microSD slot to makes it easy to add extra storage.