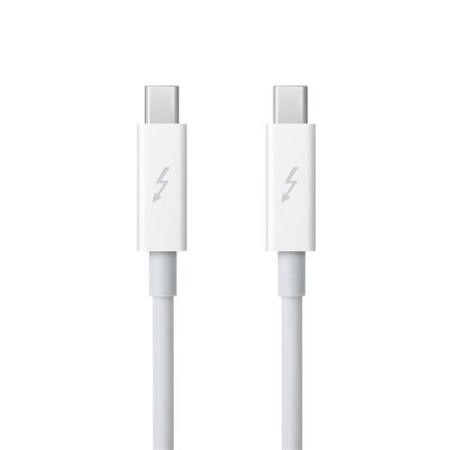 click to close
Why buy me
More Info » Tech Spec »

Apple's Thunderbolt cable enables you to connect a Thunderbolt-compatible Mac with Thunderbolt-equipped peripherals such as hard drives, displays, video capture devices, and more. Thunderbolt technology supports blazing-fast data transfer with two independent channels of 10 gigabits per second (Gbit/s) each. The Thunderbolt cable can also be used for Target Disk Mode between two Macs that support Thunderbolt. It measures 2 meters in length (78.75 inches).

Developed by Intel with collaboration from Apple, high-speed Thunderbolt I/O (input/output) technology delivers an amazing 10 gigabits per second of transfer speeds in both directions. The Thunderbolt port allows you to connect to new Thunderbolt-compatible peripherals as well as existing USB and FireWire peripherals using simple adapters. You'll be able to move data up to 20 times faster than with USB 2.0 and more than 12 times faster than with FireWire 800, and you can daisy-chain up to six high-speed devices without using a hub. Thunderbolt also supports DisplayPort for high resolution displays and works with existing adapters for HDMI, DVI, and VGA displays.