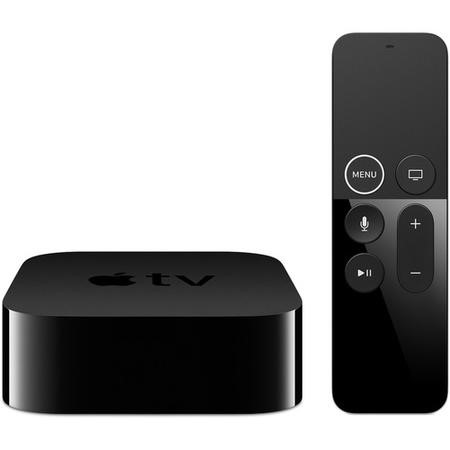 Until now, finding a film or programme to watch was a burden. You had to do all the scrolling, button pushing, searching and digging. Apple TV is designed to take the work out of watching TV. Simply ask Siri to find something for you. Bypass all those confusing buttons with a swipe of your thumb. It's an experience that makes you feel like you're interacting directly with the screen, even though it's on the other side of the room.

Feel fully immersed in your screen. Even from across the room.

Many of the products we make — iPhone, iPad, Apple Watch — are built around the same profound experience: connecting you directly with what's on your screen. Simple, natural movements of your finger play a big role in that. But how do you create that same immersive experience with a screen that's hanging on the wall 3 metres away? The Apple TV interface solves that fundamental challenge by using Touch and voice to reimagine how you interact with your TV screen.

Touch. The most natural way to navigate.

The glass Touch surface on the Siri Remote was engineered to provide an experience that feels both fluid and precise. What your finger does on the remote is exactly and immediately what it does on your screen. It's so natural, in fact, that your eyes don't even need to look down. You never have to hunt for a button to press or have a light on to see.

Voice. The most efficient interaction tool ever.

There's no easier way to interact with something across the room than using your voice. The Siri Remote lets you do what's natural — just say what you want. Siri takes you right where you want to go without having to click through multiple menus to get there. And thanks to Dictation, entering text in search fields has never been easier. You can even sign in to apps with your voice just by spelling out your username and password.

A clean design that brings your content to life.

Screens throughout Apple TV have been designed to let the content be the hero. And the use of parallax makes film and TV posters visually come alive while clearly showing you where you are on the screen. You'll feel like you're interacting directly with your TV screen, not separated from it.

Double-click the Home button on the remote and you'll see the apps you've used most recently. So you can quickly switch from, say, Netflix to BBC iPlayer, or from an iTunes film to Yummly, without having to go all the way back to the Home screen.

Move your most-used apps to the top row of the Home screen for faster access. For example, move up Netflix, and when the icon is selected, shortcuts to Netflix content appear above. Just click a title to start watching. You can also group apps together in custom folders as you do on your iOS device. Just drag one app on top of another to create a folder, then give it a name like "Games" or "Sport".

When you're not actively using Apple TV, it relaxes by displaying aerial HD videos of stunning locations around the world. Shot specifically for Apple TV, these dreamy landscapes drift across your TV, turning your big screen into a mesmerising work of art.

The fastest way to find what you're looking for? Ask Siri. Siri makes finding your favourite entertainment easy. Just say what film or programme you want to watch, and Siri finds it for you. Tell Siri you want to watch something on Netflix. Or ask it to find Nemo. Siri knows exactly what you're talking about. Ask Siri to recommend an app or find a specific one, and Siri searches the App Store for you. Tell Siri to stream a custom radio station from Apple Music or play the hit songs from 1973.1 It's that simple. Dual microphones allow Siri to hear your commands clearly, even if there's background noise. Which means the days of wading through page after page of choices to track down your favourite programme — or using a remote to type in every letter of a film title — are thankfully over.

Siri does the digging. So you don't have to.

Searching for a film used to take almost as long as actually watching the film. With Siri, you can quickly search for a film or TV programme across popular services, including content apps such as iTunes and Netflix. All your viewing options are displayed on the screen, so you can see where a film or programme can be found. You'll also see if it's available to rent, buy, or watch with a subscription. The apps Siri searches are updated often, so you're never more than a word or two from something entertaining.

Refine your search. Siri is smart enough to keep up.

With Siri, you can make follow-up commands during your search until you find exactly what you want. For example, tell Siri you want to see science fiction films released in the '70s. Siri will find them. Then narrow your search further by saying "Only the good ones." Siri uses reviews to pare down your list. And because you're talking just as you normally would, it all feels completely natural. <>Touch Surface - TV was controlled by buttons. Now it's controlled by Touch.

The Siri Remote has a precise Touch surface, so you can use your thumb to quickly and accurately navigate around your television screen. You can also control the volume on your TV or AV receiver. And thanks to Bluetooth, you don't have to point your remote at your TV. Apple TV picks up your commands from anywhere in the room.

Control your big screen from your small screen.

The next best thing to your Siri Remote is the Apple TV Remote app. Once you download it, you'll have full control of your Apple TV from your iPhone or iPod touch. Use the app to ask Siri to search for films, music and TV programmes. Enter text with the keyboard or navigate by touch and gesture. Or play games that take advantage of the accelerometer and gyroscope.