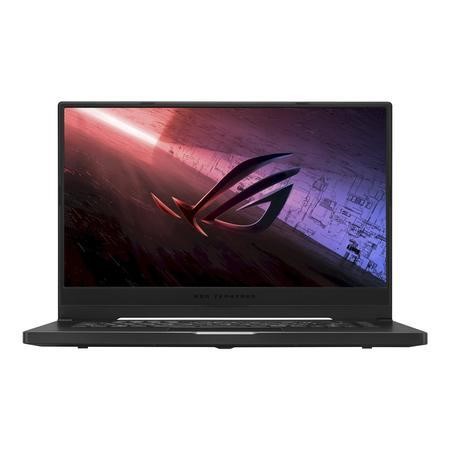 All your Gaming Needs are Met with GTX Graphics

ROG Zephyrus G15 includes NVIDIA GeForce® GTX 1660Ti graphics, with ROG Boost up to 1435MHz at 60W in Turbo mode to provide ample horsepower for a wide range of popular games and VR experiences. Plus, with 6GB of graphics memory and a boosted clock speed of 1335 MHz – the ROG Zephyrus G15 provides fresh and immersive gaming making sure you can game on-the-go wherever, whenever.

BOOSTED PROCESSOR UP TO 4.2 GHZ

Powered by a Quad-Core AMD® Ryzen™ 7 processor, with a boosted clock speed of up tp 4.2 GHz and sixteen CPU threads, the AMD® Ryzen™ 7 4800HS can balance the most demanding of tasks from high-end gaming to creator applications all from within a small laptop chassis that's slim and portable.

Enhance and Amp up your Audio

ROG Zephyrus G15 puts audio at the forefront with dual speakers aimed towards you. Smart Amplifier Technology keeps the speakers within thermal and excursion limits, so you can pump up the volume without harming the cones. Resulting in the output being louder, with more bass and range that helps you hear every sound, plus you can plug in a headset for even more immersion.

A Pure Stroke of Gaming Genius

Play on a keyboard that features a desktop-inspired layout and dedicated hot keys that put volume, microphone mute, and ROG Armoury Crate software within easy reach. Overstroke technology triggers higher in each keystroke for faster responsiveness, and N-key rollover registers every press precisely in the heat of battle. Work or play into the night illuminated by the pristine glow of clean white backlighting and the ROG Zephyrus G15 laptop design has separate function blocks for intuitive identification.

The Zephyrus G's self-cleaning thermal module ejects dust to improve long-term stability, while Dual n-Blade fans spin 83 blades each to generate impressive airflow within the slim frame. Keeping the heatsinks free of debris is critical to maintaining optimal thermal dissipation, a special anti-dust tunnel was designed that catches and channels particles outside the chassis to prevent them from collecting on the fins. This self-cleaning system helps ensure consistent cooling performance over time, which improves long-term stability and overall reliability.

Unlimited access to over 100 high-quality PC games on Windows 10. One month subscription to Game Pass that’s included with the purchase of your device. Download and play new games on day one like Halo Infinite—plus recent blockbusters like Gears 5 and critically acclaimed indie games. With games added all the time, you’ll always have something new to play.