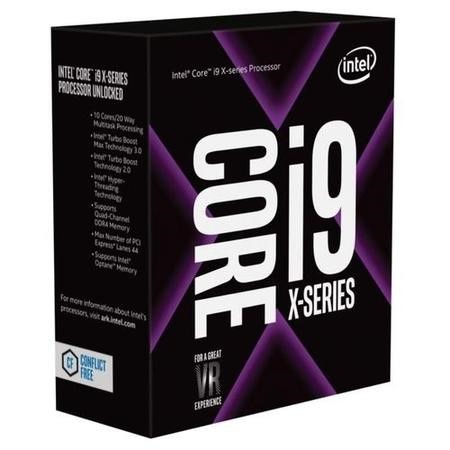 The 7900X may be the earliest of the brand new X-Series i9 range from Intel but it still comes equipped ready to tackle powerful processing. With a high core and thread count, every technology available to the X-Series (including Turbo Boost 3.0) and the most PCIe lanes ever of any desktop processor, this Intel i9 CPU is a force to be reckoned. Experience true CPU power with an i9 X-Series Processor.

Enter the realm of extreme performance where game play is so life-like it is difficult to tell where reality ends and the game begins. Surrounded by multiple high-res displays and premium audio sound, you are totally immersed in the action of your AAA game title or the latest virtual reality thriller. Play extreme, live extreme, game extreme on a computer with an unlocked Intel Core X-series processor.

And because modern gaming extends beyond just gameplay, you want to simultaneously share your gameplay with the community and the world. Record all the action capturing that once in a life-time manoeuvre that brought you to victory, and convert your game play into a shareable format to immediately post on your social media page. That is extreme mega tasking and the power of the Intel Core X-series processor.

Dynamically increases the processor’s frequency, as needed, by taking advantage of thermal and power headroom when operating below specified limits.

Identifies the two fastest cores on the processor die to provide improved single threaded performance on X-series processors. The driver provided along with the feature allows end users to direct workloads to the fastest core by setting priority to preferred applications.

Supports up to 4 channels of DDR4 (up to 2666) memory with 1 DIMM per channel. Support for the Intel Extreme Memory Profile (Intel XMP) specification, revision 2.0 for DDR4.