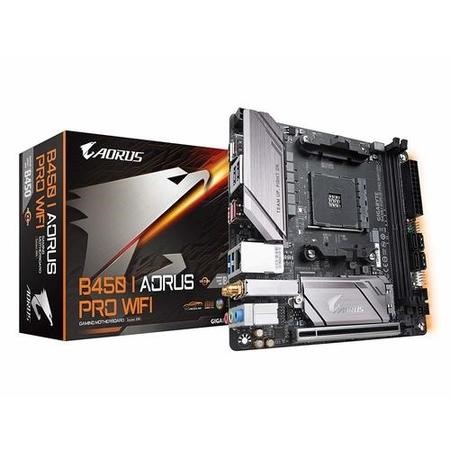 GIGABYTE 400-series maximize your PC's potential with AMD StoreMI technology. StoreMI accelerates traditional storage devices to reduce boot times and enhance the overall user experience. This easy-to-use utility combines the speed of SSDs with the high capacity of HDDs into a single drive, enhances the read/write speeds of the device to match that of SSDs, bolsters data performance for incredible value, and transforms the everyday PC to a performance driven system.

• Offering SSD performance with HDD capacity at an affordable cost.

• 50A for both each Vcore phase and each SOC phase.

GIGABYTE Motherboards are focused on delivering M.2 technology to enthusiasts who want to maximize their system's potential.

With durability in mind, GIGABYTE provides a thermal solution for M.2 drives. The M.2 Thermal Guard prevents throttling and bottlenecks from M.2 devices as it helps to reduce and dissipate heat before it becomes an issue.

AMD 400-series chipset provides native USB 3.1 Gen2 ports with speeds up to 10Gbps. Available over the USB Type-A connector, the USB3.1 Gen2 is much improved with twice the bandwidth compared to its previous generation as well as backwards compatibility with USB2.0 and USB3.1 Gen1.

Microphone input with higher front dynamic range allows gamers to hear more clearly. No more misunderstandings, no more confusing GO! GO! GO! as NO! NO! NO!

AORUS Gaming Motherboards will support either 5v digital LED lighting strips and up to 300 LED lights. RGB Fusion with Digital LEDs comes with 9 new patterns and various speed settings with more to come.

Now offering more LED customizations than ever, users can truly adapt their PC to represent their lifestyle. With full RGB support and a redesigned RGB Fusion application, the user has complete control over the LEDs which surround the motherboard.

With the all new RGB Fusion software, users have access to different preset LED lighting configurations with choice of colours. You can even set the LEDs to synchronize with your favourite music or have them change colours to indicate the CPU temperature. For true lighting experts there is an Advanced Mode, which can be fully customized by individual area with its own effects and colour transitions, along with specific duration and transition times.

• Independent Control: Customized different colour for different section of board

• Synchronize with AORUS Graphics Cards: Synchronize colours with select AORUS video cards to complete the feel of your system.

• Lighting Profile: Save, export and import profiles to quickly change effects based on your preference and to share with others.

• Synchronize with RGB FUSION READY Peripherals: With a dazzling array of products supported, RGB Fusion is the software that brings it all together, letting your accessories synchronize to the same beat.

Don't just make your PC shine, make it a work of art that friends will envy. With the GIGABYTE RGB Fusion mobile app users can watch as they control the lighting within their gaming PC. This gives users ease of access as they try and adjust colours and speeds for different modes, all this can be achieved away from the keyboard and monitor of their PC.

Set The Colour That Matches Your Style

With a dazzling array of products supported, RGB Fusion is the software that brings it all together, letting your accessories synchronize to the same beat. Customize all your LEDs how you like — have them match, dazzle and impress.

• Supports High Current Fans up to 24W(2AX12V) with Over-Current Protection.

Achieve fan silence. With Fan Stop map any fan to stop completely when temperatures drop below a specified threshold. Which fan stops, based on readings from which sensor, and at what temperature—all of it can be customized to your liking.

Assume complete control over your liquid cooling setup! Smart Fan 5 receives up-to-the-second information on flow-rate through the Hybrid Fan Pin Headers—giving you absolute mastery over your PC. All Hybrid Fan Headers can automatically detect the type of cooling device whether it be fan or pump with different PWM or Voltage mode.

Choose from different modes, Quiet to Full Speed, to match your system usage scenario. For each fan or pump, you can use the intuitive fan curve to define trigger thresholds and corresponding fan speeds.

• Interoperable Sensors and Fans: Each fan can be customized to operate at different speeds according to any defined temperature source input (except the CPU fan).

• First Lock: Inserted from the top for better retention.

Sulfur compounds in the air can penetrate tiny on-board resistors creating chemical change and causing these resistors to open or short. If either of these occurs the motherboard will fail to function. By equipping resistors with an Anti-Sulfur Design GIGABYTE gives Ultra Durable Motherboards a whole new meaning.

The BIOS is essential for users during initial setup to allow for the most optimal settings. With a new GUI and easier to use functionalities, GIGABYTE has been able to reinvent the BIOS to give users a better experience while setting up their new system.

To facilitate being the full streaming solu

tion each AORUS motherboard includes TriDef ® SmartCam software, you are now able to remove backgrounds without the hassle of using a green screen. Through the SmartCam application you can now apply live filters, and fully control your background, not only while streaming, but also through other video applications such as Skype. *Free 1 month TriDef ® SmartCam License.

CEC 2019 Ready: Save The Power As Easy As One Click

HDMI™: The Next Generation Multimedia Interface

HDMI™ is a High-Definition Multimedia Interface which provides up to 5Gb/s video transmitting bandwidth and 8-channel high quality audio all through a single cable. Able to transmit superior, uncompressed digital video and audio, HDMI™ ensures the crispest rendering of digital content up to 1080p without the quality losses associated with analog interfaces and their digital-to-analog conversion. In addition, HDMI™ is compatible with HDCP (High-bandwidth Digital Content Protection), allowing the playback of Blu-ray/HD DVD and other protected media content.