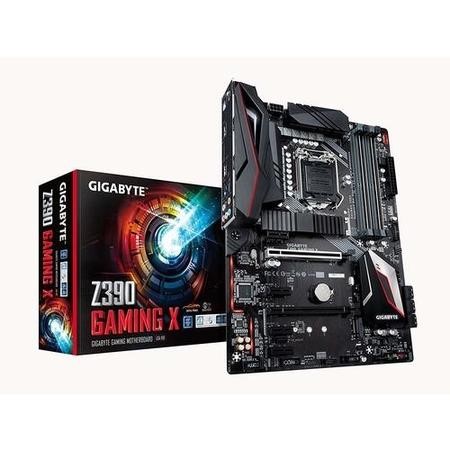 IMPRESS THE COMPETITION WITH GIGABYTE

Experience the extreme GIGABYTE Z390 GAMING X motherboard from the exclusive Z390 series. Bursting with exciting and patented GIGABYTE technology, ranging from audio to performance and even multi-way graphics for gaming enthusiasts who demand the highest frame rates without compromising on resolution. The Z390 GAMING X motherboard is reinforced with ultra-durable components on the memory and PCIe slot armour, and components such as high-quality capacitors. Make the Z390 your own, with customisation capabilities by changing colour modes with vibrant RGB lighting.

DELVE INTO A NEW UNIVERSE

Multi-graphics configuration offers better graphics performance for gaming enthusiasts who demand the highest frame rates without compromising on resolution. Immerse yourself into a virtual world with VR technology as this requires more performance than Full HD graphics for a steady 90FPS or greater. With newer technologies such as NVMe support via M.2 or U.2 and a one piece metal shielding to brace for heavier discrete graphics cards, it's obvious that GIGABYTE GAMING has the tools you need to start your journey in VR

PERSONALISE YOUR SETUP WITH VIBRANT COLOUR

Intel GbE LAN features cFosSpeed, a network traffic management application which helps to improve network latency and maintain low ping times to deliver better responsiveness in crowded LAN environments. Gigabyte motherboards also feature special anti-surge ICs that protect your motherboard, and your PC from any surge in power delivery that may occur, helping to ensure that your PC is equipped to deal with any potentially irregular and inconsistent power delivery.

GIGABYTE Motherboards are built with dual M.2 slots. With a PCIe NVMe + SATA dual-mode design on M.2 slots. This configuration is designed for flexibility and adaptation to fit most users' and gamers' requests.

FASTER SPEEDS UP TO 10GBPS

Intel's native USB 3.1 host controller provides USB 3.1 ports with speeds up to 10Gbps. Available over the USB Type-A connector, the USB 3.1 is much improved with twice the bandwidth compared to its previous generation as well as backwards compatibility with USB2.0 and 3.0.

With Smart Fan 5 users can ensure that their gaming PC can maintain its performance while staying cool. Smart Fan 5 allows users to interchange their fan headers to reflect different thermal sensors at different locations on the motherboard. Not only that, with Smart Fan 5 more hybrid fan headers that support both PWM and Voltage mode fans have been introduced to make the motherboard more liquid cooling friendly. For each fan or pump, you can use the intuitive fan curve to define trigger thresholds and corresponding fan speeds. Map any fan to stop completely when temperatures drop below a specified threshold with Fan Stop.

Never worry about your heavy graphics card damaging your motherboard again. GIGABYTE’s proprietary Ultra Durable PCIe Metal Shielding reinforces the PCIe connector to prevent slot damage due to heavy graphics card. The DIMM and PCIe metal shield also provides extra strength for when you forget to release the lock while replacing your component, adding a foolproof option which can save your PC’s life.

DURABLE AND BUILT TO LAST

Sulfur compounds in the air can penetrate tiny onboard resistors creating chemical change and causing these resistors to open or short. If either of these occurs the motherboard will fail to function. By equipping resistors with an Anti-Sulfur Design GIGABYTE gives ultra-durable motherboards a whole new meaning./p>

GIGABYTE has specially designed the BIOS to provide users the most premium experience while constructing their new system, with a new GUI and easier to use functionalities. The BIOS is crucial for users during initial setup to allow for the most optimal settings.