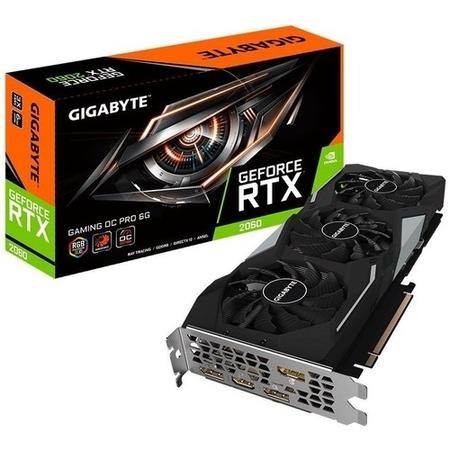 The GIGABYTE GeForce RTX 2060 Gaming OC Pro is powered by the new NVIDIA Turing GPU design and the innovative RTX platform, RTX graphics cards combine real-time ray tracing, artificial intelligence, and programmable shading. With GPU boost clock of 1830 MHz the GIGABYTE GeForce RTX 2060 Gaming OC Pro guarantees an outstanding gaming performance. Keep things cool with GIGABYTE's cooling system which includes a 3D Active Fan and Direct Touch Heatpipes to make sure you get the best performance out of your graphics card. Another feature is the new airflow system to the RTX 2060 where the card's fans have alternating rotations which increases airflow out of the card and improves cooling temperatures.

SYNCHRONIZE WITH OTHER AORUS DEVICES

The RTX GPUs are powered by the Turing Architecture, this gives you 6x faster performance over previous-generation graphics cards. Turing uses a new 12nm manufacturing process and also brings the power of real-time ray tracing and AI to your games.

The GeForce RTX 2060 delivers truly unique real-time ray-tracing technologies for cutting-edge, hyper-realistic graphics, this means the RTX 2060 is light years ahead of other cards and gives you the most realistic gaming experience ever. The RTX cards also are the first graphics cards to feature GDDR6 memory that has a speed of 14Gbps (14,000 MHz).